Welcome to the Frontier, Miner. Grab your Hardsuit, prepare the accelerators, we've got a busy day ahead.

Bare minimum requirements: Break rocks, collect ore and bring it back to the main ship for refining. 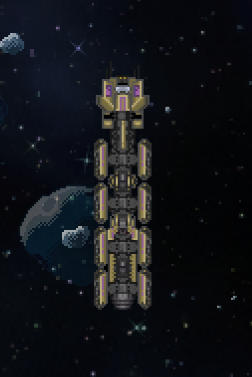 The Rocinante, your workspace and home away from home.

Being a miner can be somewhat tedious, but without your valiant efforts, the ship and it's crew will use up every scrap of materials they start with and descend into anarchy. You best know what you're doing before stepping out.

Your workplace, The depths of a space rock, has a couple risks:

The risk of these hazards can be reduced by watching your surroundings and always having your accelerator on hand to help you out. Having some friends as backup can majorly reduce the risk and even the impact of these threats.

You can click on an adjacent rock or run directly into it to begin picking or drilling the rock, but the Kinetic Accelerator is much faster and more efficient and you should be using that instead of a pickaxe or basic mining drill. Keep in mind that if you do decide to pick or drill your way through rock, you can have multiple dig jobs running at the same time to mine faster.

Working With Your Boss[edit | edit source]

Who is your boss? You answer to the Executive Officer, much like the rest of Supply -- but usually, you'll just be talking to the Quartermaster or other Miners. It's best to make some friends, as you'll be seeing your fellow miners a lot.

You're here to mine, so get digging! Once you're full to bursting with ores, drag your ore box back to the main ship and head to cargo where the Ore Redemption Machine

sits. Drag the box next to the machine to automatically offload your ores and have them instantly processed into sheets. Then click "claim" to retrieve mining points as a reward for your hard work, these points will be placed on whatever ID is currently in the machine. Once you've deposited your ores. Check the Cargo Protolathe for those all important upgrades and head back to the Rocinante.

How to Do the Do[edit | edit source] 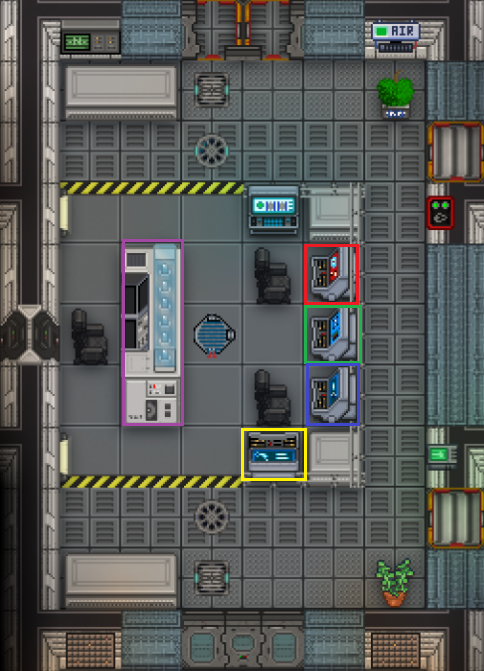 The Bridge of the CIC, where you'll be most of the time between mining or getting drunk.

Now this is where things get more complicated. So try to follow along. The Image on the right shows each of the important consoles in coloured boxes, these are the:

You'll need to become familiar with most of these consoles if you want to do your job for more than five minutes. First, let's go over Piloting.

Piloting in NSV operates on two systems, Mouse Controlled, and Laser Controlled. Mouse control causes the Ship to aim towards wherever your mouse is pointing, While laser will attempt to align it with wherever the laser on the front of the ship is pointing, which can be rotated with the Q and E keys.

To actually make the ship go fast, hold the W key to start moving. A few hotkeys to make note of are:

Keep in mind, the Rocinante is a fast and manoeuvrable vessel, meaning it can easily outrun most enemies and do some fairly sick drifts. 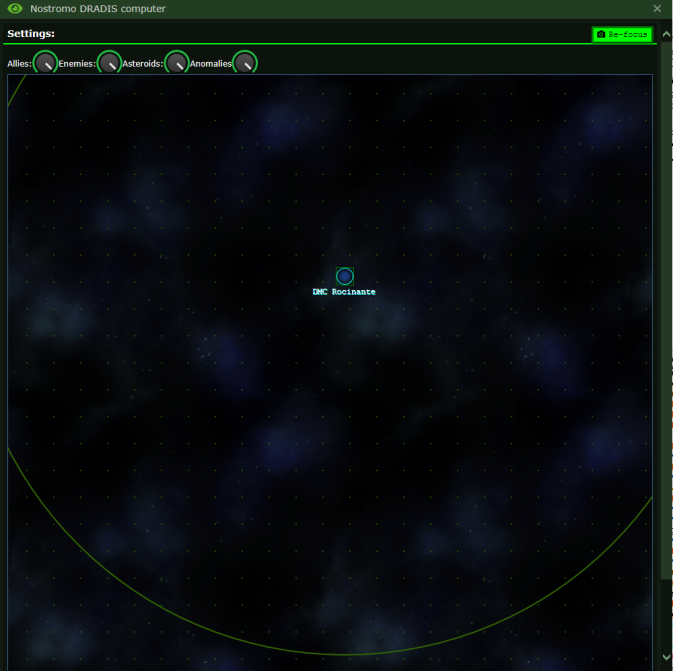 The Rocinante DRADIAS, Clear of Signals

Deep Space Radar! Around the Rocinante a large circle indicating sensor range, inside this circle signals will be identified and their name and affiliation revealed. Outside, they will just be known as "UNKNOWN" Use this console to locate asteroids and drive over to them. Once nearby, slam on the breaks and move to the Magnet Console. There's also the option to disable specific signals, but this is rarely used.

So you've cracked open every asteroid in your current sector eh? If you had any to begin with... The FTL Navigation and Spooling Console are the tools you need to keep mining for all eternity. First, head over to the Spooling console and set the spooling to 1. This will cause it to automatically begin spooling up, upon reaching 100% the ship will be able to jump to another sector. This is done in the Navigation Console.

Head over to the Navigation Console and Open it up. The Rocinante always starts in Lalande 21185, a Nanotrasen owned system. All systems have two rings, the Inner and Outer ring. The Inner ring shows what affiliation the System has, Blue is Nanotrasen, Orange is Unaligned, Red is Syndicate and Systems with no inner ring are Uncharted. The Outer ring is far simpler. Blue means you are there currently, Green means you are able to jump there and red means you cannot.

To jump to a system, select a system with a green outer ring and press the "Jump to System" Button. This will cause a short warm up sequence before jumping into FTL. WARNING Jumping will bring any nearby fighters with the ship. Once you jump into FTL, the Spooling Console will shut down, and you are able to restart the spooling process. 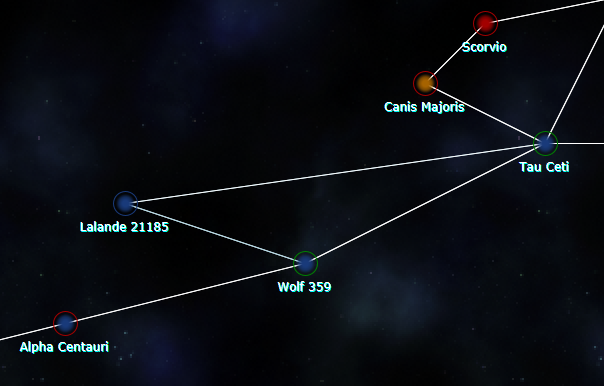 Upon opening the Navigation console, you should be greeted with this.

You start the shift with a complimentary mining voucher, worth one free item out of a selection of four. These items, and their strengths, are:

The following is a list of default mining equipment:

Items that, while not critical to take, can be situationally useful.

The following are more advanced items that need to be purchased from a mining equipment vendor, with credits:

These items can either be acquired from a voucher, or can be bought with money/credits, usually earned from delivering ore to the Ore Redemption Machine

on the station. Prices are included.

The following is a list of advance items that can be acquired only from RnD, using a combination of minerals and high tech research.

All of this gear is printed out at the supply department protolathe.

These are what you should be looking out for, generally try and get a good mix of the more exotic ore types. Iron ore is ok but it sells for little and is highly abundant on the station already.

Miners don't have to deliver ores directly to departments -- they can if they want, or if those bastards are too lazy to leave their fortress of autism science -- but it never hurts to know what to aim for.

A traitorous miner has a lot of advantages. You have a space suit for free right away and a robust pickaxe. Certain minerals you'll find have more "specialized" uses -- uranium structures will irradiate people, plasma can start fires, gibtonite goes boom. You can also buy dangerous "mining" tools and possibly even revive those monsters you've been fighting. As long as you have some mineral wealth or an ore box with you, no one will suspect your presence around the station, even in highly restricted areas like robotics or toxins, and if you are smart enough, you could get a big stompy mech to drill people to death!

If you're a miner, you'll find being a cultist a difficult task as the Rocinante blocks all teleportation from any source, meaning cult teleport runes won't work. You'll have to work something out, I suppose.