You are the less-alcoholic half of the Maltese Falcon.

You cook food, blend veggies and fruits, grind bodies for meat, stick monkeys and xenos onto meat hooks for meat. And kill people who mess with you, with your kitchen knife.

Bare minimum requirements: Make sure there's always some food on your counter, in case a hungry crewmember comes by. 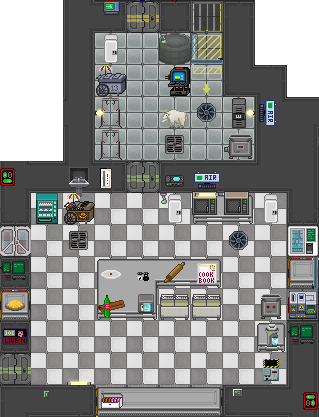 Your workplace, the kitchen and freezer

The first cook to join the shift starts with a speckled coat, a nice maid jumpsuit and a cool chef hat like in those movies. Any other cooks that join later will have a cook's apron and a white cap. Cooks get a lot of cool kitchen related things, too:

Cooking is mostly done by putting ingredients on a table and see what you can cook with it through crafting (click the crafting button in the bottom-middle-right of the screen). Certain types of dishes also allows you to make custom food (pies, cakes, ...) by direclty adding ingredients on the dish. You will at times need the processor or microwave, a beaker, a knife and a rolling pin to prepare some raw ingredients (e.g. mix flour & water to get dough), check the cook book on the kitchen table for more info.

Use the microwave to cook raw meats and raw eggs. Trying to microwave other food will make it dirty and unusable until it gets a spray of space cleaner. And if a microwave gets broken, you need to use a tool box set to repair it (the tools, don't smack it more). The processor and the blender are much more forgiving. The processor will only take things that it recognizes and the blender will blend any food item (granted, you might not get anything interesting out of it). You also have a ChemMaster to separate and identify anything you produce with your blender.

See the Guide to food and drinks for a list of recipes. Most recipes are completed by crafting; place all your ingredients next to you, open the crafting window and look through the food categories.

To serve your food, you can use the table that faces the main hallway, serve patrons in person with your food cart, or even add your superior creations to vending machines. Theoretically, you can work with the Bartender to serve patrons in the bar, but most chefs don't.

This is a Knife, and That is a Rolling Pin[edit | edit source]

The knife and the rolling pin on your table are invaluable in making food. You can cut cheese very easy with the knife, slice foods like pizza and cakes, and prepare other foods (test what you can cut with it). Some animals can be butchered with the knife as well. The rolling pin, meanwhile, is used to flatten certain ingredients, such as dough.

Other than that, they are also weapons! The knife, in particular, is an excellent melee weapon .Tinker with your vending machines, and you can get even stronger security risks knives!

Besides the basics that your kitchen is initially stocked with, you will start out with a randomly selected box of less common ingredients in your backpack. The box should contain enough ingredients for you to get started before your botany buddies ignore you and smoke weed can provide you with a steady supply of fresh produce.

Your neighbor, hydroponics, is a necessity for you to make most recipes. Take a gander at the window early on and see if there are any botanists working, and if there aren't any inside, wait a bit for one to be sent on the arrivals shuttle or go ask the HoP for botany access so that you can grow your own plants. They will most of the time grant you access because hydroponics isn't a high-risk area. Good things to ask the botanists for to start with are wheat, tomatoes, and potatoes. These three plants are used commonly in recipes, and after you ask botany for those you can ask them for other plants when they need to be used in a recipe. Please note that hydroponics has direct access to your smart fridge, and will often times load crop into it without saying a word. Check it from time to time to see if the hippies have left you anything.

If no one is working botany and you're too lazy to stop by the HoP, the Garden has some basic produce available (most usefully, wheat) and the ability to make more seeds, assuming no one's ransacked it.

The glory days of meatspikes are sadly gone, and they can no longer be used to slaughter monkeys instantly. Nowadays, they're usually only good for holding victims animals awaiting butchering. However, even so, monkeys are still a good source of food in the gibber, and they will produce a small amount of meat for you to use. Monkeys can be produced by adding water to a monkey cube; monkey cubes can be produced with the biogenerator or ordered in a supply crate.

Some critters can be gibbed with your knife for meat, but they need to be dead first. Try not to kill Pete, as it is able to eat space vines if alive. Pete also has an udder for some ungodly reason and can produce fresh milk infinitely (every tick has a 5% chance to produce between 5 and 10 milk), so killing them for meat should be a last resort.

Surgery can allow you to remove brains and appendixes from some lifeforms. You can use these organs as ingredients in a few recipes.

Your gibber is EXCESSIVELY useful during long rounds where you are feeding a lot of people. If you can't get Pun Pun or get the quartermaster to get you a monkey crate, you can head off to the morgue. That's right, the cook has morgue access to grab spent bodies and drag them to the gibber. Examining dead bodies can tell you more about them: suicides, literally brainless bodies and bodies with their souls departed cannot be cloned, so gibbing them is usually okay. Your gibber can only accept unclothed bodies, so remove any clothing or other objects the body may have on them.

If you enjoy freedom, you can cook things by putting them in the deep fryer. Even objects that aren't normally edible can be fried and then eaten. To use the deep fryer, put something in it, and it will begin soaking in the greasy goodness. The fryer will emit a sound after some time to signify that it's officially fried, but true cooks a little bit longer for that perfect deep fry.

Deep fryers use cooking oil to cook things put into it. It starts with 25 units, and uses 0.05 per tick by default. As food fries, it gains more cooking oil internally, with overfried foods having a massive amount of cooking oil in them. Deep fryers require cooking oil in order to fry food. You can't just use water or any other reagent. However, as long as there's enough cooking oil to fry with, the fried food will transfer any reagents in the fryer to itself, meaning that you can put healthy flavor-enhancers in it to saturate the food you fry in it.

You can find cooking oil yourself inside of a vat in your freezer, which has 1000 units of it by default. Cooking oil itself has a few special properties - hot oil splashed on people will deal a hefty amount of burn damage scaling with temperature (capping at 35 burn per reaction), it makes floors slippery, and it automatically fries foods it comes in contact with!

If you have an aggressive grip on someone you're pulling, you can click on the fryer to dunk their face into the hot oil, dealing huge burn damage and knocking them down. This will use half of the reagents in the fryer, though, so repeated dunkings will use them up very quickly. If you can get your hands on some hotter liquids, then your deep fryer can become hilariously deadly, but remember that it needs cooking oil to actually do the frying part.

R&D can upgrade your microwaves, doubling the amount of food they produce! On long shifts with lots of people this will prove invaluable, assuming all the scientists haven't set themselves on fire. They can also upgrade machines like your gibber (which will produce a horrifying amount of meat when fully upgraded) and your deep fryers (which will use less oil and fry things faster.)

Close your door behind you when you enter the kitchen. If you leave your door open when you come in, a murderer can run in and quickly stab you with a pen, take your ID, and throw you in your own gibber before you can say "BORK BORK BORK!" If people are trying to break in regardless, close the shutters over the tables, or give the table-climbing intruder a quick shove by running into them before they can descend into your sacred workspace.

All food contains the universal ingredient called "Nutriment." It's what nourishes you and heals your injuries when you eat. Although food might not heal you as quickly as the doctor can (or from the more exotic dangers of the ship), it can often heal for more over time. Blending down a bunch of donuts and burgers into a nice nutriment shake can be just the right pick-me-up after having the shit beat out of you.

Healthy foods also contain "Vitamin" which heals you better and can strengthen your metabolism against viruses and harmful chemicals as well as increase the effect of medicine on you.

You can put your healthy food inside snack vending machines so players have more food choices.

As of a recent recruitment initiative by Nanotrasen, all cooks are now trained in close-quarters cookery, or CQC for short. To protect their workplace from certain people who like to hop the tables to mess up your day and, more importantly, your precious cooking. This functions very similar to the CQC martial art that nuclear operatives can buy from their uplink - it shares the move set, as well as its bonuses, and is mechanically identical. However, your CQC only works in the kitchen and cold room. As soon as you step foot outside of this area, your unarmed skills revert to normal.

CQC is pretty damn powerful. You can view the moveset in-game by using the button titled Remember The Basics in your CQC tab. If you need a refresher, you can also find the moveset on the Syndicate Items entry for the CQC manual. Of course, yours only works in the kitchen, but the moves are the same.

Traitor Cook is pretty damned fun, especially if you get some some items to knock people out like the crossbow or the sleepy pen. You can even take syringes full of nasty chemicals and inject it into food items. The best part about being a traitor cook is the cleanup; seeing a cook dragging a locker with a dead body in it is pretty par for the course, so no one will question you when you toss your target's body in the gibber. If you have a compatriot in Hydroponics, they can grow you some poisonous shrooms which you can then refine with the Blender and ChemMaster. Don't forget your knife and rolling pin! In short, go full Sweeney Todd and make delicious meat pies out of people. You can also feed fat people the mint, which gibs them.