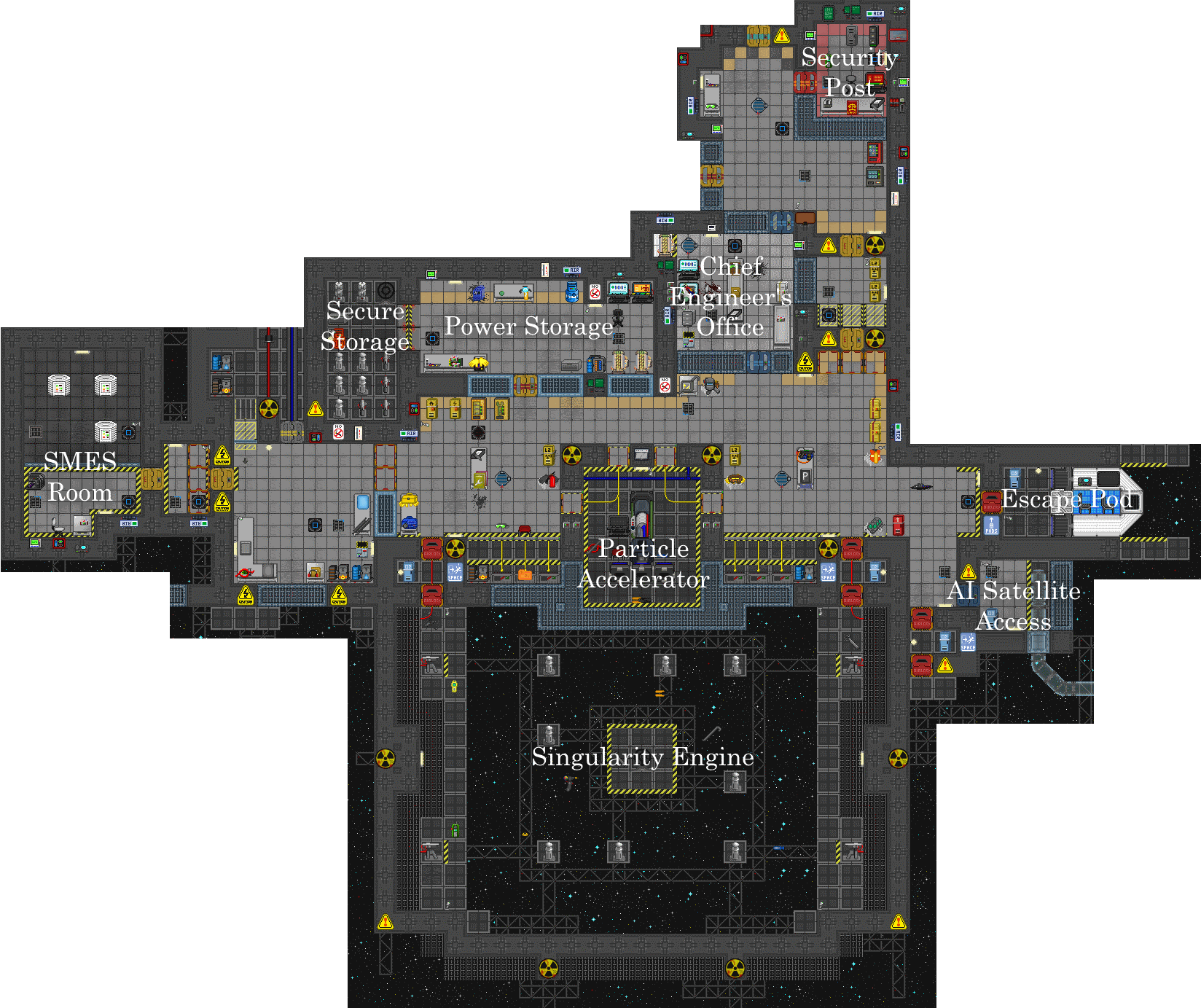 Know that guy who builds all the things? Well, he has a boss, and it's you! You are the head of the Engineering Department, which includes not only Station Engineers, but Atmospheric Technicians as well. Essentially, your job is to boss your staff around and make sure the power flows. Other than directing the workflow of the department, you're also expected to carry out general engineer-duties and maintain Telecomms. Additionally, you should look after the Ship's Integrity. To be a good CE it is imperative to have a good working knowledge of how APCs, SMES cells and power in general works, how to decipher atmospherics, how to efficiently set up the Engines and solars, and how to get your charges' sorry asses moving.

Bare minimum requirements: Make sure that at least one power source goes online at the start of the round. Know what to do when Telecommunications and the cloner get blown up. Know how to repair the station and its machines such as APCs.
Basic skills: The entirety of Engineering, Telecomms and Atmospherics. Communicate with your staff and teach inexperienced team members.
Advanced skills: Advanced optimization of station power sources as well as Atmospherics. Coordinate your team to fix the station when torpedoes, boarders or meteors hit. Be robust enough to deal with rogue Cyborgs and Cultists.

It's no secret that Engineers are more often than not the laziest of the station's crew and that there is no job that surpasses the capacity for an Atmospheric Technician to be completely clueless about his own department. This is where you come in! As stated above, your duties consist pretty much entirely of telling the Engineers and Atmos Techs to work or just doing their jobs yourself. Listed below are those jobs.

At the Start of the Shift[edit | edit source]

Greet your team over the radio and establish your authority. Find out who you will be working with and how many of them, and make sure that everyone has a job to do. If you stay silent then when you suddenly need something done halfway through the round, you can guarantee that nobody will listen to you. If nothing else, speaking over the channel will at least tell you who on your team you can rely on. Sometimes your team will be fairly competent and you'll only need to supervise, but a lot of the time you will be required to step in. If someone's clearly new, help them out a bit and show them the ropes. If someone's clearly being a twat then shout at them and forcibly demote if they continue. With these points in mind, a power source should successfully come online and start generating power. It's always a good idea to announce this to the crew when it happens. If any of your team members try to run off with an engineering hardsuit just to go space exploring, let them know that they will be arrested for dereliction and demoted if they do not return to do at least the most minimal duties before doing whatever they want. If you take charge these first minutes of the round, most of engineering will follow the rest of your orders until the round ends. Designate your engineers to the different duties in engineering, including longer-lasting jobs such as monitoring armour, maintaining a specific engine or preparing for damage control.

With Your Powers Combined[edit | edit source]

There are multiple ways to power the station. Unless you know what you're doing, stick with the default ones at first, and get it working as soon as possible. It's hard to set up a second power source if the crew is trying to lynch you for not finishing the first one.

The Stormdrive reactor is your go-to power source if it is available on the map. The Reactor works by pumping a mix of gases into it and regulating the temperature by inserting control rods to cool it. The Stormdrive is available on most maps currently in rotation. Besides providing a decent amount of power for the ship, the SD is fairly quickly set up and quite flexible in terms of input gases, it can also be left alone for quite a while in a stable state before the reactor's control rods need to be replaced. The Stormdrive is also a great but dangerous reactor to experiment with, due to the impact changing the gas mix can have on the reactor it can go very wrong, but also very right.

Speaking of nuclear, the AGCNR (Advanced Gas-Cooled Nuclear Reactor) is an equally good choice for powering the ship as the stormdrive. And it works on the same principles as the Stormdrive as well. The reactor can hold up to 5 nuclear fuel rods, and the reaction rate is also controlled with a set of control rods. This is generally a reactor that requires more attention than the Stormdrive but can be modified more safely than the SD. The AGCNR is only available on the bigger ships in the fleet, most notably the Tycoon, Aetherwhisp and Gladius After the reactor is set up, you'll most likely have someone assigned to keep an eye on it. Mainly for any non-engineers who waltz in and think they can just turn off the coolant outlet. And that's the downside of this engine, you can very easily sabotage it by turning off a valve or two, as it requires constant cooling with a gaseous coolant. You'll also want to take precautions when replacing the nuclear fuel rods, which degrade over time, to avoid the Armor Pumps running out of power during combat.

Depending on the model of your ship, there might also be a turbine or thermo-electric generator installed. Both of these use heat to make power, but work on different principles, so make sure you use the right guide when setting one up.

Whilst the Stormdrive or nuclear reactor outputs a metric shit-ton of power, a hardened engineer like yourself knows that they can be incredibly unreliable at the best of times. This is where the solars come in. Solars output a decent amount of energy and can keep the station running at a bare minimum whilst you inevitably sort out an issue with the reactor, but they need setting up first! Luckily this is even easier than setting up the singulo and you can just designate one of your minions to go out and complete the task, better yet if they volunteer.

The Supermatter isn't present on any map (except the Aetherwhisp) round start but a shard can be ordered from cargo to build a setup. Its primary features are emitting tons of radiation, making everyone who could theoretically see it hallucinate, releasing hot oxygen and plasma, heating the air around it, and either exploding or creating a Tesla/Singularity when you screw up. It begins inert but being hit by an object or projectile or put in space will activate it.

Power Your Station With A Black Hole[edit | edit source]

The Singularity Engine isn't present on any map either but a generator can be ordered from cargo. It should go without saying that, since the singularity is essentially a black hole, it should stay inside of its containment field and not grow too big. Also, keep in mind that it pulses large amounts of radiation and EMPs, so always wear an engineering hardsuit or a rad suit when you're near it, and keep flashers and other sensitive electronics away from it (including cyborgs and IPCs).

Make Tesla proud and run alternating current power the station with giant balls of electricity! Lately, the Tesla Engine has been getting less and less popular on mobile Nanotrasen vessels. Operating it is somewhat similar to the singularity engine, but instead of radiation, it will generate lightning bolts that must be captured with coils. It's also slightly less destructive than the singularity when it's "Accidentally released", only blowing up any and all machines, mobs and structures in its path.

The stormdrive is running, the solars are wired and the engineering team is at your beck and call. The station is getting a steady supply of power and you're confident your team can maintain this and repair any damage to the hull. Your job is done, right? NOT SO FAST, my friend! Haven't you forgotten atmospherics?

Yes, as hard as it is to accept, that convoluted bundle of pipes and its clueless staff are under your jurisdiction and it's your responsibility to make sure that it's keeping everybody breathing. As the CE, you are expected to know the basics of how atmos works, how to optimize it, and then how to keep people from fucking with it. Luckily, that's pretty much it. Again, read the guide and learn it.

All you really have to do with atmos is get acquainted with its staff (you can do this at round start along with your direct minions, as they share the engineering channel), make sure they know how to optimize it (if not, do it yourself - better yet teach them), and then check back in periodically to ensure some asshole hasn't tampered with it, slightly more if the atmos team is the usual band of drooling lunatics.

Please keep in mind that making Atmospherics sabotage-proof (for example by removing the plasma tank from the loop) before you have decent IC evidence that someone is going to sabotage it is considered meta-gaming.

As the Chief Engineer, it's also your task to ensure the ship does break apart while the pilot tries a three-point turn and backs into the same asteroid for the fifth time. Or you know, the Syndicate shoots at you. In both cases, it's your job, or one of your engineers you designate for it to man the armour well and pumps and repair the ship's hull and armour. Some maps also have a shield generator proving another layer of defence for the ship at the prize of high amounts of power.

Now that the station's systems are running at maximum capacity or are in the process of being made so, you can relax a little. Here is what you should be doing:

As a Head of Staff, you are a prime target for the Revolutionaries, and will most likely be attacked in some way. While setting up the spare emitters, stealing the RCD and holing up in Engineering is a tempting possibility, it is in extremely bad form and will be met by negative karma and general hatred towards you. In short, do not barricade yourself in Engineering during a Revolutionary round. It makes rounds take way the hell too long, and may prompt non-revolutionary engineers to invade, especially if you start dicking around with the power supply.

As a Traitor Chief Engineer, you have a lot of options going forward, many more than most.

You have easy access to anything of any real importance on the station, with the added bonus of being regarded only slightly more important than the RD (in that at least your own department listens to you, most of the time). You have the ability to completely ruin the station by fucking with telecoms, subverting the AI with the circuit board in tech storage, sabotaging atmospherics and the engine, deconstructing anything rapidly, and you can still hide away safely in space with EVA gear. Remember that an extra-capacity oxygen tank filled to 1013kPa lasts a very, very, very long time. Have fun!