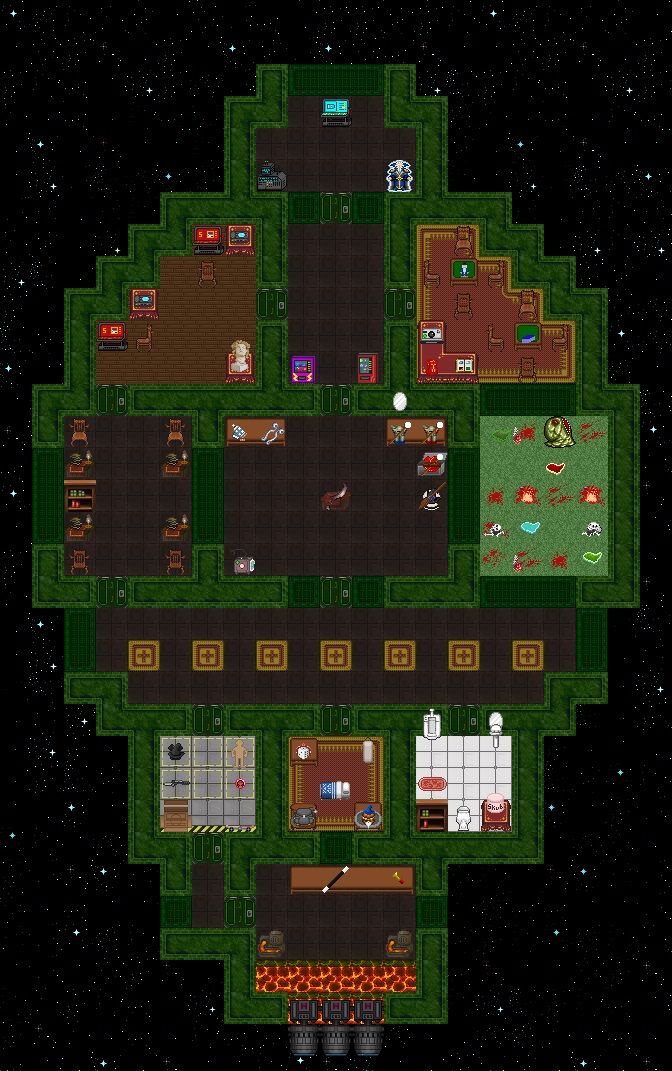 Crew members of NSV13, I offer you my sincerest greetings. My name is of no matter, but if you must call me something, you may call me The QuarterWizard. I would like to inform you that I am the noble leader of the Wizards Federation.

You may be wondering, "Why, why mighty QuarterWizard, why do you send wizards to the ship to destroy us all?"

Well, denizen of the ship, it's quite simple really: One or more of your crew has angered our magical Federation, and now you will all pay the price.

If you're lucky enough to only have certain members of the crew anger us, like that geneticist who once claimed that us magical folk are merely "products of genetics research", then you're more than likely to survive, assuming you give our wizard the means to escape early on. If not, well... Not even I, the mighty QuarterWizard can guarantee your safety. We train our wizards to be masters of many spells, so there is no saying how exactly you will succumb to our mighty wizards.

But, for you lesser beings, I have archived a list of our most common spells, so as to assist you simpletons in identifying just how skilled and varied our wizards can be.

If you are a Wizard, then remember to keep your wizard hat and robes on. Not only are they the latest in wizarding fashion, they are also a powerful magical amplifier. If you lose those, you are in a boatload of trouble.

Do everything in your power to keep your skirt on. Hurl spells, throw rocks, shout hurtful names at them. Whatever you do, don't let them touch the clothes.

You start on board a Wizard Ship. You will first be asked to choose a name. You have 10 spell points to spend. You spend them by using your spell book in hand. A menu will appear which contains lists of spells, categorized in tabs. You can also choose name, race and appearance by using the magic mirror on the wall. When you are ready to go to the ship, use the "scroll of teleportation" and select a room to teleport to.

Use the Wizard's Ship you start in to familiarize yourself with the spells before you teleport onto the ship. You can even re-learn the spells as often as you'd like as long as you're here. Take your time. No need to jump in right away. You can also use the advanced camera console to spy on the ship before leaving.

1. Choose name, race and appearance with the magic mirror.
2. Spend 10 spell points with the spell book.
3. Make sure you are wearing one of the robes and one of the hats (unless you plan to stealth or use robeless spells). All robes and hats/helmets found on the Wizard's ship have the same stats.
4. (Optional): Bring anything else you think might be useful. The free staffs/brooms are just decorations or very weak melee weapons.
5. (Optional): Find a good location to teleport to with the advanced camera console.
6. Use the scroll of teleportation to teleport to the ship. Remember, you do not start with a flashlight. Maintenance will be pitch black.
After arriving to the ship, you can do whatever you want. Cast spells by clicking the icons that appear to your upper left. They will be invisible when on cooldown.

You can take any of your spells multiple times to upgrade them, generally giving them a lower cooldown. You can also turn yourself into almost any race via your Magic Mirror, some of which are more powerful than others.

If you can, masquerade as a Quartermaster Supply Wizard. Not only will you look like the most powerful wizard of all time, but people may be liable to turn a blind eye to your presence. Combine this with some quick spellwork and you may just kill a bunch of people without getting caught.

These spells require the Wizard's POWERFUL, MYSTICAL ROBES AND HAT. So wizards, for your own sakes, never take off your robes.

There are many other spells that do not require THE EXTRA MIGHT of a magic wizard robe. These spells are weaker, but nothing to laugh at.

These are not spells but tools that can be used by anyone. Extremely dangerous to a wizard should one of the crew members pick them up.
Magical staves, swords and hammers generally never fit in backpacks or bags, and must be worn in the back slot.

Wands, unlike staves, do not recharge over time. They can be recharged with the Charge spell, but even then they may lose maximum charges after every charge.

One-use spellbooks teach a spell to the first user. Everyone that reads it subsequently will instead trigger a recoil effect, usually harming the reader.

Rituals are powerful, one-time use spell that can only be cast from your spellbook on your ship. These are generally either completely pointless or detrimental to the crew (and you) in some way or another; their true purpose lies in causing PURE, UNTAMED CHAOS.

The big bad list of all the devious magical events that replace the usual random events on the ship. These happen uppon purchasing the Summon Events ritual at least once, and their frequency increases with each purchase.

WARNING: This table has not been updated in a long time, and is severely out of date. Do not expect all of the events listed in this table to still be in the game. 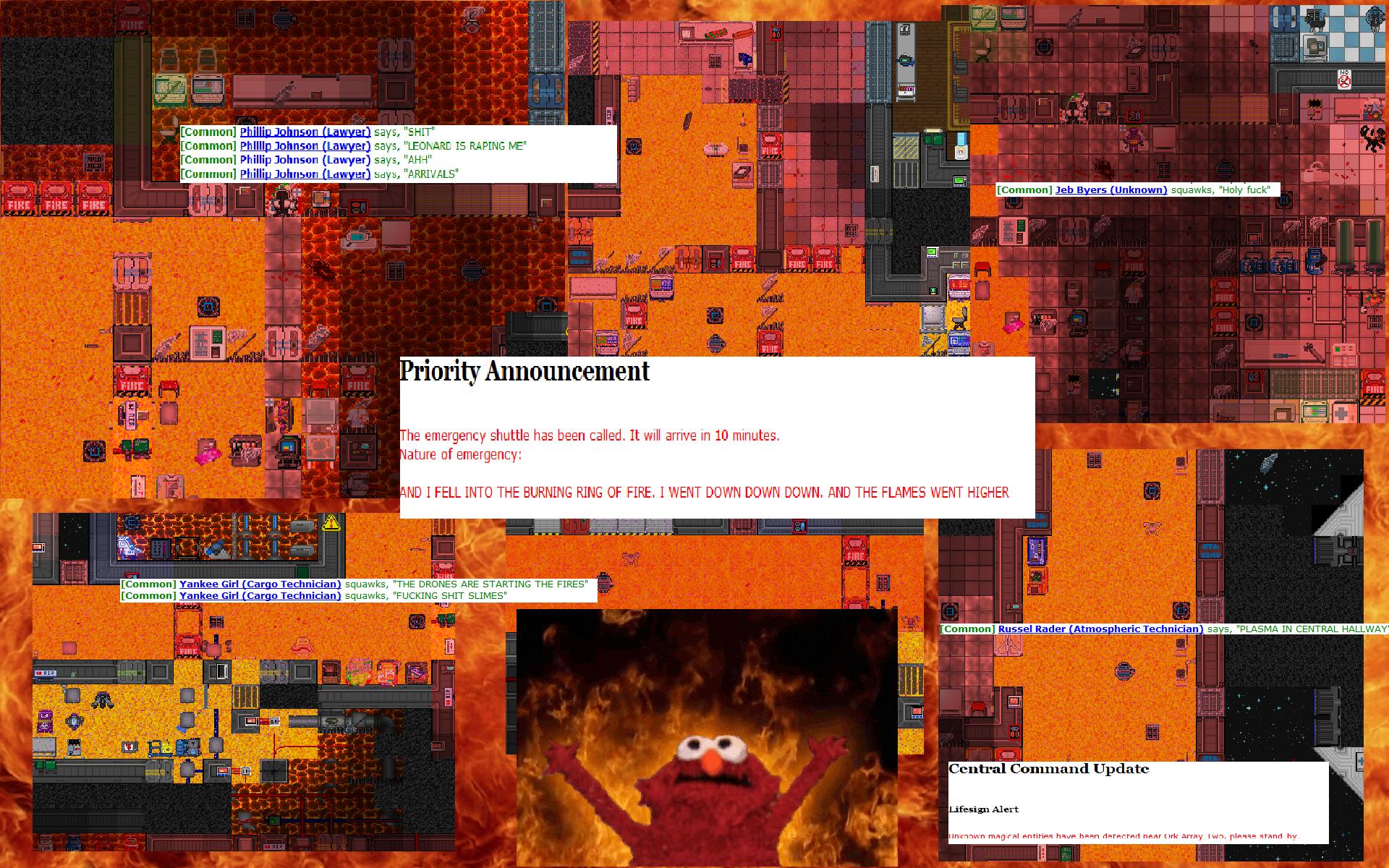 Your typical wizard events round.

These Brain Traumas only appear when you (the wizard) cast the Curse of Madness ritual before heading to the ship. There is a 20% chance that a person will have a Magical Trauma rather than a mild/severe/special trauma.

The AI and You![edit | edit source]

NOTICE: THE WIZ IS HUMAN (unless he is a lizard wizard or a Skeleton, or something that's, you know, not a human.)

Usually, when you go on your long space adventure, you come across an AI.

The AI will either be nice to you and attempt to protect you from the evil crew, or it will track you the whole time, and attempt to trap you! (Luckily, you have been trained by the greatest!) If this happens, go into the AI core, and see how he can track you while it's dead.

If you're feeling nice and don't mind being stunned a few times, you can always pop into the upload! When you get inside, take a Freeform module, pop out, and make nice law explaining how you are practically god of the ship, and return to the upload, and of course, upload it!

After that, the AI will be very nice to you, and serve you, his master.

So you've been made a wizard but don't feel like going on a murderboner and would rather live peacefully among the crew? No problem! The staff are usually very friendly towards wizards [CITATION VERY MUCH NEEDED] if they announce themselves to be friendly and the AI is programmed not to harm them. So pop over to the XO escorted by the Captain/HoS and request to be part of the ship! Who knows, maybe you can be the Janitor! Just remember that you are by law and backstory an enemy of Nanotrasen. Don't get mad when some magic-hating sociopath tries to kill you. They'll try.

Your first time playing as a Wizard can be disorientating and very hard, but also demanding. Just figuring out what spells to take is half the gamemode onto itself, the other half is utilising those spells. As such this section will detail some basic, but robust, starting Wizard loadouts.

You only get up to 10 spell points to spend, meaning your spell loadout will be limited. So don't overspecialize.

A basic, but robust set up. Gives you good offensive and defensive capabilities that favour hit and run attacks.

Using Ethereal Jaunt to launch a ambush, then using Magic Missiles to grant you a effective area stun attack while Disintegrate lets you quickly dispatch a single target. Blink and Knock offer a effective fallback to escaping a bad situation or if you screw up.

Disintegrate is often considered unsporting, though, so expect dead chat to be mad at you if/when you die.

Heavily oriented around attacking and killing the crew, you suffer from very little defensive spells, thus relying on being robust enough to kill anyone before they become a threat.

This loadout focuses on Magic Missiles and Mutate in order to kill, as well as either Disintegrate or Fireball to help deliver the coup de grâce. Disable Technology is effective in sapping all energy from Security Officers weapons while Blink offers a small defensive spell to get out of a bad spot.

This loadout focuses on survivability almost exclusively. You're going to have to rely on stealing ship weapons in order to kill people, however you yourself will be really hard to kill as you have a large array of defensive and retreat spells to use.

A dangerous and advanced loadout, this set up relies on stealth, evasion and confusion to get the job done. However this can prove effective in avoiding getting shot and pulling of outrageous tasks.

If you're discovered you will have few defensive or offensive abilities to employ, Fireball is your only main offensive spell, taking either Blind or Smoke can help in avoiding targets and Forcefield can help keep away pursuers.

I Have No Idea What I'm Doing[edit | edit source]

Have you NEVER been a wizard before and are incredibly afraid of screwing up and causing the round to end 5 minutes in? Have no fear! With this loadout, even if you're incompetent, the ship will still descend into chaos! Why cause mass murder and death yourself when you can have the crew do it for you?

Did you know that your wizard ship has a camera console in it that you can use to observe what's going on in the ship? You'll be using it a lot with this loadout, as you'll generally want to wait until Summon Events spawns guns and/or magic before beaming down onto the ship yourself so that the round doesn't immediately end when you die. Fortunately, you won't have to wait long, because the level 5 version of Summon Events summons an event EVERY MINUTE! Yes, that's right, a wacky wizard event will occur EVERY MINUTE until the game runs out of wizard events to summon! And YOU can watch the resulting chaos from the comfort of your own ship!

If you'd like to take a more active role in events, consider using a Summon Events x4 (which summons an event only once every 1-2 minutes instead of once every minute) + Bind Soul + Summon Ghosts build instead. Become a lich as soon as possible after arriving on the ship and try to keep your phylactery safe- if you die without a phylactery (because you either didn't make one or because the one you made was destroyed) before Summon Events makes another (still alive) antag, the round will end before the chaos from your Summon Events castings fully manifests.

These loadouts are meant as a general guide on simple loadouts to use. We highly recommend you experiment with any spell combination when you can.

I have but one question for you, now that I revealed all this knowledge to you,

Will you be ready?