Do not play this without some experience as a Cargo Technician first, you'll ruin the round.

As a Quartermaster, your primary job is to flood the station with paperwork and more paperwork order equipment to help keep the station running. Make sure credits aren't wasted, kick the clown out, and make sure your Cargo Techs aren't getting into trouble - and pull their arses out of the fire when they do. You have three helpers to run off with anything not bolted to the ground and ignore you help you redistribute things throughout the station. You also have authority over mining, and should try and coordinate the Shaft Miners to meet the needs of the station -- primarily, this means passing on requests from Robotics, Research, and Engineering.

You have sunglasses, a unique jumpsuit, mining access, and your own office. This is all that distinguishes you from a Cargo Technician. The Head of Personnel can waltz in at any time and order or take whatever they want.

Bare minimum requirements: Try to get some bounties completed and make sure your hard-earned credits aren't wasted. 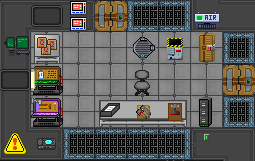 "Who the hell blew all our credits on Wizard Costumes?"

The Cargo Bay and your office is filled with paper, paper and more paper. Most importantly, there is a console to order items. Everything that people will expect you to order that cannot be procured from the autolathe will show up on the Supply Shuttle once it arrives at CentCom.

Each order will produce a requisition form, which is usually best just shoved in the adjacent filing cabinet and forgotten until Security kicks down your door demanding to know who flooded the station with shotguns and clown outfits. Try and make sure that you know who ordered what. Your console and the one in the Cargo Office are ID-locked, requiring Cargo Bay access to function, meaning that only your subordinates (Cargo Technicians) and Superiors (Captain and Head of Personnel) can order stuff unless they somehow got access.

You have a cargo budget card in your bag. Every order on your console requires you to spend credits. The pool of credits is also used for other station purchases, such as custom shuttles, and to fund large station projects. As the QM, it is your job to make sure the station has enough credits to do so.

Check out the Supply Crates page for details about how to make money.

The Vault contains a machine that accepts physical space cash and coins and adds it to the cargo budget's total credits. This machine can also be robbed by unsavory individuals, causing you to lose credits, but there will be a loud warning ("Unauthorized credit withdrawal") if this happens. The Quartermaster can enter the vault by using the supply door remote, found in the QM's locker.

"Robotics is bugging me for a Ripley Crate - Everyone point and laugh."

Crates are the lifeblood of your department. Ideally, you'll be ordering quite a few of them. These can be delivered via MULEbot, via the mail office, via people picking them up, or your loyal workforce delivering them themselves.

There are very few jobs who will require a crate early into the round, so until something special happens or their progress gates are met, you'll have the pool of cash to play with all to yourself. This includes the Autolathe. While you start with no materials, Auxiliary Tool Storage is just a ten-second walk away and will keep the lathe running for quite some time if you get all the metal and glass.

What's in Those Crates?[edit | edit source]

You start with quite a few credits, so here are some good first choices for the prepared Quartermaster:

Crates For Everyone Else[edit | edit source]

Eventually, you'll get a feel for what different people want. The Roboticist will almost always want either metal and glass, while the Virologist will perhaps want a Virus crate. The Bartender might want to borrow a circular saw for his shotgun, and the Botanist might want seeds.

One of the marks of a good Quartermaster is the ability to anticipate someone's order and have it ready for them. This often means keeping a stock of insulated gloves and welding masks (if you're the type to hand those out to certain people) and checking out who walks in. If you just hand out everything to everyone, you are a security risk. Use your own judgement - an Assistant should not have an RCD, but an Engineer definitely should. Likewise, the clown should not have a combat shotgun, but Security can have one if they want it.

"Confirmed Revs? Mindshield Implants and nothing but!" - Anonymous Quartermaster, shortly before suffering a tragic work-related accident

During a revolution, you can turn the tide for either side. The Quartermaster quickly becomes one of the most powerful people on the station, able to order mindshield implants or weapons en masse depending on what side they're on. Security will likely want to implant you as soon as possible. Your sunglasses protect against flashes, but revolutionaries won't hesitate to beat you down and steal them to ensure your brainwashing.

And if you happen to be one of the scant few bourgeoisie who have taken up the cause of the working man, remember to convince your comrades that it is time to rise up and throw off the chains of the opressors.

Requisition Me a Beat(ing)[edit | edit source]

"Fun is Contraband. And we're all about contraband."

Many members of the station know that the QM can make things they aren't supposed to, and most security officers will overlook a little recreational hacking. Hack the Autolathe to make nifty toys like RCDs and Flamethrowers. You don't even need a multitool for this. Just snip and fix till you find the one that turns off the blue light - Remember your rubber gloves, because the green light makes it shock you. As long as you don't try to wall off Cargonia with an RCD, most people will forgive you for being prepared.

It's common for the Quartermaster to, at the very least, enable the MULEbots' nonstandard cargo and speed the motor up, though you can also upgrade the power cell if you have spares. The MULE is one of your best tools as a Quartermaster, and can make your life (and subsequently the lives of the rest of the crew) so much better.

See here how to use a MULEbot.

Contraband posters contain inappropriate themes that Nanotrasen has deemed too vulgar and have subsequently banned them from their space stations.

There's also a certain way to open crates you shouldn't, if you can get your hands on it. Security will often panic about a Quartermaster that is better equipped than they are, so keep your ill-gotten gains hidden and secure until they are needed.

"Why is there a Singularity being built in Escape?" - Commissar Jesus, Chief Engineer

Being a Traitor QM is one of the best damn things in the game. As a Quartermaster, you have direct and easy access to weapons and tools many other jobs do not, and can easily conceal most of your nefarious deeds. Cutting the cameras is the first step to success drawing attention to yourself, followed closely by ordering and hiding a weapons crate. Better yet, send the crate back and stash the loot in your locker. Hell, you can even order a ton of weapons and give all of them to the greyshirts. Maybe they'll accomplish your objectives for you.

If you're feeling daring, order a Cryptographic Sequencer and use it to unlock any crate you want. You can even emag the ordering computer to get the Special Ops crate. Problem is, this makes it a dead giveaway that you're a traitor if someone checks the console. Don't forget to awaken the MULE's bloodlust -- that'll cause some havoc, creating an amazing distraction, and you can blame one of your slaves to take the heat off yourself.