The Roboticist's job is to maintain the system's cybernetic sevitors, including borgs and various bots that they can create. When provided with resources, they can construct powerful Exosuits. 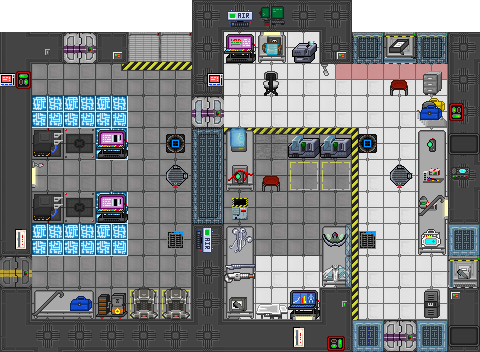 Robotics is your home as a Roboticist. It contains Exosuit Fabricators, used for the creation of any robotic component you require, a few cyborg recharging stations, a few Exosuit recharging stations, a chest with multiple sheets of metal, Power Cell, and a coil of wire, and scattered tables with a multitool, tool boxes, a few Flashes, a crowbar, a proximity sensor, more scattered power cells, and a cell charger.

First on the agenda is to fulfill any early requests to turn people into Cyborgs. Fill the Exosuit Fabricators with metal and get them churning out some cyborg bits. Place flashes in the cyborg head, and cables and a power cell in the torso, then add all the pieces onto the Exoskeleton.

There will likely be one or two people waiting around for you, so either let them in via the service window or go actually open your door for them. Oblige them. After all, this is what you are here to do. Take out their brains via surgery, and put the brains in MMIs. Then, stuff the brainless corpses down disposals in the Morgue. Finally, insert the MMIs into the cyborg shells. You now have cyborgs!

Try to keep at least 1 complete cyborg body on standby for the inevitable train of corpses that will be coming through your door. In the downtime, feel free to devote your precious metal and time to building robots or exosuits. If Mining all died off or R&D is uncooperative, keep busy by stealing a bucket from Hydroponics (Or the Cargo Autolathe) and creating Cleanbots, or using up all your Medkits for more Medibots.

Sync your Exosuit Fabricators for extra miscellaneous parts and cyborg upgrades, and get building. Mechs require acid which can be obtained from the Chemists, and mining should obtain the metals you need. You will have a love-hate relationship with the R&D lab and its residents; on the one hand they are required for you to obtain mech circuits and equipment, but on the other they are taking all that wonderful silver from you that could be going to making a Durand. Once you do get enough ores though, it's smooth sailing. Make exosuits, give them to people with little-to-no authorization, and watch the ensuing chaos from your comfy chair.

Keep your metal organized, and understand how much each machine will take (and you will always need more metal). Glass is important for your robotics work, as are various devices, security equipment and rare minerals. Don't waste them. Third, have a plan before you start building anything huge, like an exosuit (without obtaining the necessary circuitry, they are useless). Fourth, make sure to perform maintenance on cyborgs that come in; Nanotrasen usually doesn't load them with anything but the minimum required power cells. Fifth, tech storage is your friend. It has two flashes, two power cells, and insulated gloves. For bonus points, beg the CE/RD/AI to let you into secure tech storage to get a robotics/exosuit circuitboard to control what you make in case it decides to kill everyone. Finally, ensure you have proper eye protection when you weld, or you'll become blind quickly.

Being an Evil Genius[edit | edit source]

Traitoring as a Roboticist is fun and easy, especially since you spawn with flashes, and an expectation of building very dangerous machines. Your high ship access, and access to tech storage will allow you to get pretty much anywhere, considering that you can have gloves off the bat. And, of course, emagging any of your basic creations serves to cause havoc and chaos. The toxins kit's contents poured into a single large beaker of an emagged Medibot can create a very dangerous 'helper'. Emagging the cyborgs equips them with a Syndicate lawset, gives them special new tools, and prevents them from being fucked with on a control console. Though remember, cyborgs slaved to a malfunctional AI can not be emagged. If you want to make a cyborg despite having no volunteers, it's never a bad idea to simple drag the body of your last murder victim back to the lab for a debraining - Rarely do people question you once the body is already being operated on.