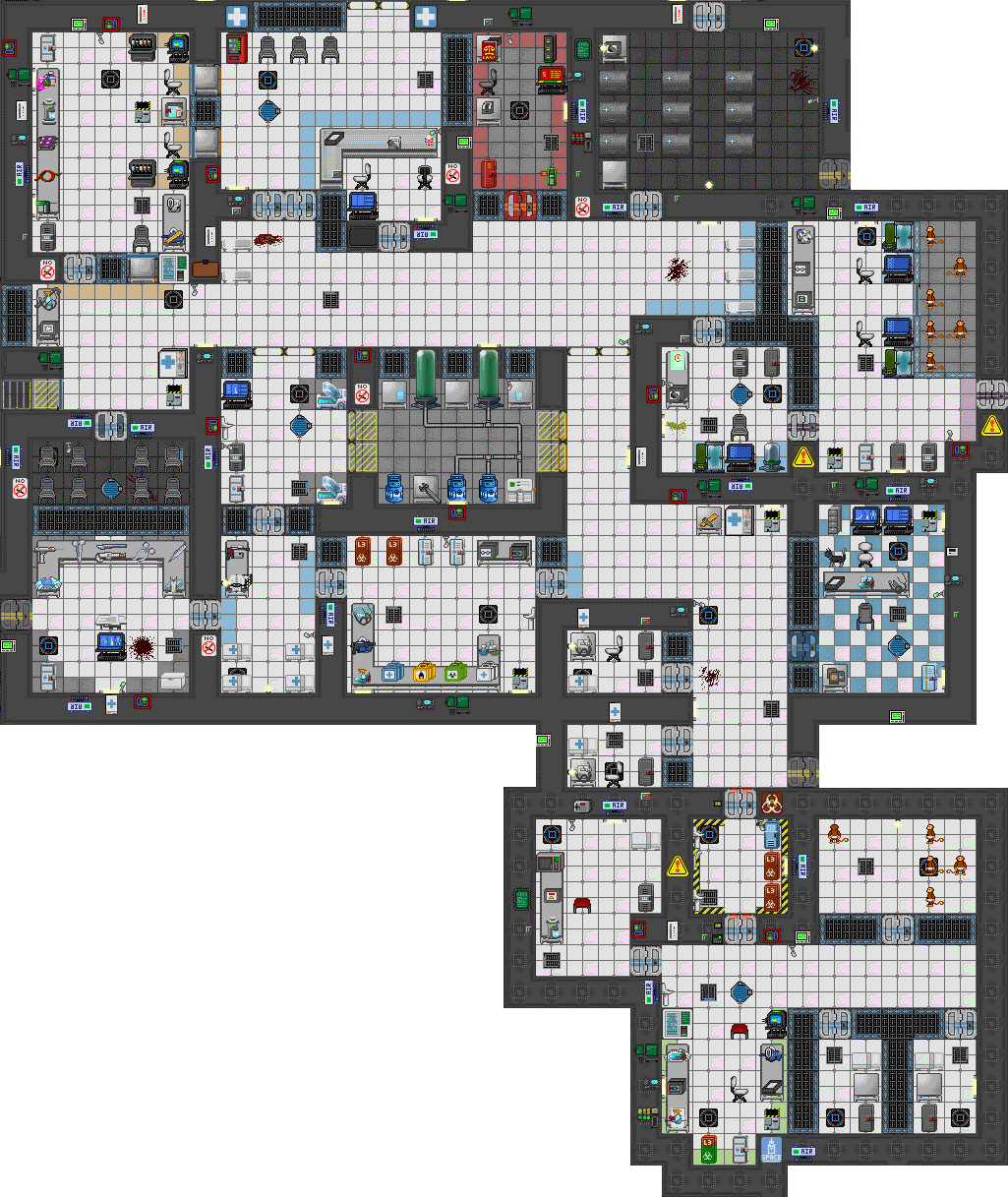 You run this shit

Oh boy, you're in for a ride. You're a teacher of a class of retarded babies with knowledge in medicine (hopefully). Imagine taking retards to a zoo. That's pretty much what you have to do - make sure people are resurrected or robotized, make sure the virologist doesn't cause an outbreak and make sure no one mixes up the brain freezer with the department fridge.

Bare minimum requirements: Remind the crew about suit sensors, see that cryo is set up.

Your first goal is to establish yourself. People forget about you really easily, so if you don't want to get kicked off the bridge as a break-in, make a quick announcement for everyone to turn on their suit sensors (this will save your EMTs some trouble) and check in with your staff over your medical radio channel. Having full access to genetics and chemistry doesn't hurt either, so try to take it on yourself to produce some medicines for later use, and maybe load some Chloral Hydrate into a syringe gun or your Hypospray for those rainy days. Don't be afraid to take over for cloning and medical chemistry if you're understaffed.

At some point, you might have your Virologist ask you for a Virus Crate, since you're his boss who he wants to keep informed the only one who can unlock it. If you're feeling wary about their abilities, ask them to come up with a vaccine for a simple disease first, like the flu. After a little while, he might end up with a beneficial virus that he wants to release. Make sure you tell him to run this by you first, and double-check his work before giving him the green light. If he releases one without telling you, immediately take a blood sample from an infected person and scan it in the pandemic machine in Virology. If it only has good symptoms, commend them on their work, then yell at them to run it by you first in the future. If the disease has bad symptoms (possibly including superpowers, ask over the command radio if the Captain wants hulk'd Assistants running around freely), tell the other heads immediately and start passing out the cure to people en masse. If you have a chance to subdue the rogue Viro safely, do so and drag them over to the brig, but otherwise just focus on curing people and let security handle things.

Depending on how busy the medbay is, you may have some spare time to dick around with now and then. You can spend this time pretty much however you want, whether you want to brew up some Krokodil extra healing chems for later, scan people in genetics in case they die and their body can't be recovered, clean up the inevitable pools of blood with the Space Cleaner bottles laying around, ERP with your doctors while people need help, scan the Chef's food with your PDA's reagent scanner to make sure he isn't poisoning people, or just run a gimmick of your choice.

Thanks to recent technological advancements, the heads of staff and AI are no longer the only ones who can access the crew monitoring system. In addition to the stationary consoles at the bridge and your office, each med-vendor comes stocked with several portable crew monitors that can be used by anyone once grabbed from the vendor by someone with a medical ID. If people actually remember to set their suit sensors on have their sensors randomly set on when spawning, you can check if they're alive or dead (if Binary Vital Signs are on), what their health levels are (with Vital Trackers on), and even where they are (with Tracking Beacons on). Periodically check these monitors for people to heal or clone and send one of your doctors to them. You may even catch a murder in progress with this! Medbay has plenty of these laying around, so if a crew member like the Detective asks for one, feel free to oblige them. Remember that there's a vendor in Virology that only you and the Virologist will ever really use, so feel free to raid it for monitoring consoles and other supplies.

If someone shows up as deceased but you don't know where they are, you can ask the AI to locate them for you.

This is your chance to shine. You have a biohazard suit inside of your office. USE IT. Then consult the Virologist and Chemist. The virologist should make vaccines, and the chemists should divide them into individual pills. Vaccinate the medical personnel and quarantine the infected. Administer the drugs, keep people alive. Make sure medbay and all its equipment are sterile and blood-free. Your Medical Doctors should be helping with this, if they're not all busy trying on costumes, getting drunk, or seducing each other.

Your telescopic baton is one of your best friends. Read about [[how it works and make yourself the medbay bouncer, keeping trespassers from harassing your chemists and other personnel.

This is your medical tool, your lifeline, and sometimes your weapon. Overall, it is an instant injector (dealing bursts of 5 units, with a fill limit of 30 units). It starts with 30 units of Omnizine, which heals all four main damage types (brute, burn, oxygen and toxic. The Hypospray is best suited for emergencies where you're too busy to dig around for patches and pills. As for drugging the Clown to drain their blood self-defense, filling it with Chloral Hydrate might be a good idea to help deal with unruly patients (as a backup plan in case the telebaton fails). Just make absolutely sure that you don't forget you changed the load and inject someone in crit with 20u of chloral and kill them. You can empty the Hypospray by simply injecting its contents into something or using a syringe to extract it.

The Compact Defibrillator functions identically to the big bulky defibrillators that spawn in medbay storage with one key difference: Whereas the normal defibs are as big as backpacks and have to be put on your back to function, this is small enough to fit into a backpack and clips to your belt instead. This smaller size allows the Compact Defib to be much more versatile and useful than it's larger brother since you can deploy it on the spot anywhere, rather than dragging the body all the way to medbay for defibbing, or lugging a bulky defibrillator to the patient. Also like the normal defibs, this comes equipped with a 10kw power cell, which is enough for 10 charges. Make sure to recharge it from time to time, or bug R&D for a 30kw hyper-capacity cell so you'll (almost) never have to worry about charging it again. Whatever you do, don't lose it or leave it in your locker, since it is incredibly useful and doesn't take up much space.

Runtime is your pet cat who starts her day in your office, and most likely never leaves your office (unless R&D is fucking around with the E.X.P.E.R.I-MENTOR). She lounges around, sipping on expensive space milk, meowing and mewing all day long. It's the best life a space cat can have, and she is all yours to snuggle with and pet. Some say she is not important, as Ian is the most important pet they say (how dare they), but this is simply not true. While Ian may have more abilities like wearing things, Runtime is a space cat, who don't need no human. She is there because she allows it.

First against the wall[edit | edit source]

Medbay is about the worst place to be in a mutiny, so chances are your head will be the first to be in disposal. If people are acting strange or starting to get rowdy, arm yourself with anything as soon as possible, and be prepared to flee from medbay at any time. Your telescopic baton is your obvious first choice for self-defense since you can keep someone stunlocked by repeatedly smacking them, though you can still easily be overpowered by groups, and if someone knocks it out of your hand then the tables are completely turned. Your Hypospray is a also good choice: remember, twenty units of chloral will knock someone unconscious for a long time. Other possible weapons are a fire extinguisher axe from the bridge if you're utilitarian, a spray bottle with space lube to buy yourself some time, or a syringe gun if you only need some range.

People see you as weak and distracted, and a good target for any traitor wanting bridge access. Be alert as you work.

An evil CMO? Don't panic- you're in an interesting position, and some careful maneuvering can get you where you need to be. With care, you can get some very deadly and easily concealable weapons, and get access to almost anywhere if you can convince the HoP you're really a head of staff.

Probably one of very few roles where you don't need an emag, or a traitor weapon, mostly because of your Hypospray. Fill that thing with Chloral Hydrate -- or worse -- and then wait for a victim to walk by. Stealth and speed are key - people expect you to be in medbay, and so long as you're there and staying busy, nobody will think you're evil. Get your tools from chemistry, get a coat to disguise yourself (light blue isn't a frequently seen color), get your objective done and return to life as normal as soon as possible. Of course, if your assassination target happens to end up in front of Genetics, there's no problem with taking him to the morgue instead.

As a changeling CMO, you've got plenty of options. One of your major goals is to capture Genetics so you and your changeling buddies can feast on free corpses! With the right chemicals, your Hypospray or a spray bottle can both be used to knock out victims (Chloral Hydrate, anyone?), and you can capture many humans on the pretense on healing them. Changeling Medical Officers are best played stealthily. Try not to get anyone too suspicious of you, and see if you can ask the HoP for maintenance access.