Silently stalking the ship, leaning against invisible walls, sitting on invisible chairs, eating invisible food: the mime has a connection to another world beyond the senses of mortals. The mime is the rival of the noisy clown, and usually has a higher standard for his silent pranks and invisible shenanigans.

Bare minimum requirements: Entertain the crew while keeping your vow of silence. Don't use your PDA to talk like some sort of boorish oaf. Gesticulate! 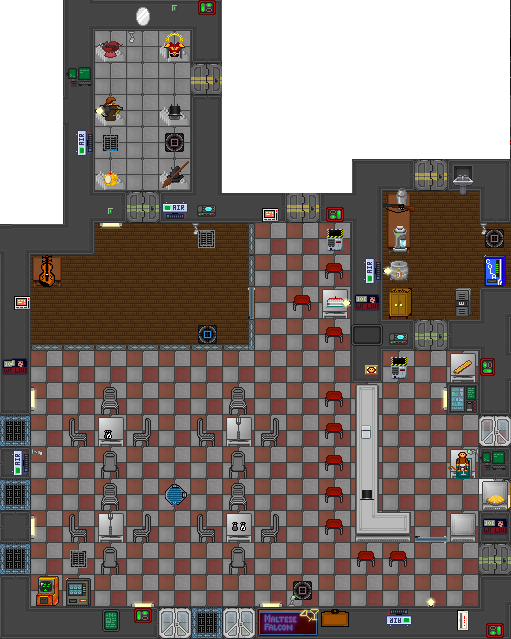 The Bar's Theatre is where you spawn along with the Clown

As the clown is here to prank people, and make them laugh, the mime is here to give a show to people! You are not a silly clown copy, you are a professional, and professionals have standards. Be efficent, be polite, have a plan to distract everyone you meet!

Like the Clown, you spawn in the Theatre and have access to all the costumes inside. Your PDA also can send 5 viruses to others on the message system, presumably making it silent.

Alt-clicking on your mask, or the action button in the top-left of the screen, allows you to express a variety of mime emotions.

A mime can create invisible walls that block the movement of any who attempt to pass them. It is unknown how, but people suspect quantum physics has something to do with it. Mimes can only manifest a wall every so often and the walls last for a few moments before vanishing; keep in mind, they can't keep out everything!

You cannot talk unless you press the Speech button in your Mime menu. However, to speak as a mime is the ultimate taboo! A mime communicates through gesture. This is his art! Noise is the place of that wretched clown, not a true performer like yourself. In emergencies, a note on a piece of paper can do in a pinch. Such a critic. Make sure your gestures actually make sense to an observer. Use custom emotes to talk and your ass is going to get banned.

A few examples for your viewing pleasure:

OKAY: Mimington points to Person A, mimics a cutting motion, and then gestures to Person B.

BEST: Mimington lifts an imaginary knife and aggressively slashes it forward!
Person C: An assault, I guess? So it was a murder. Can you show us who did it, mime?
Mimington nods solemnly, and gestures toward Person A.

Important Note: [As of September 2018], mimes who are caught talking are considered valid. Avoid breaking your vow of silence at all costs!

You can use the "me" command to emote anything you'd like, e.g. "Me waves to you".
There are also some built-in emotes in the game, some with special effects. Just use say and an asterisk before your emote, e.g. "Say *blink" (or use one of the below). Using the "me" command is essentially the same as using "say *custom".

Keeping with mime flair, the stealth items are always handy when you are a traitor. And, no one will expect you to speak, ever, so you never have to communicate on the radios. You start with a pair of white gloves, so you don't leave prints on a crime scene or your traitor items. Since a mime is expected to have a pen for writing notes, the sleepy pen is a particularly good choice. Traitor mimes can buy the exclusive Guide to Advanced Mimery Series, which allows them to shoot an invisible gun and create greater invisible walls, as long as they hold to their vow of silence.