As a chaplain, you would ideally proselytize whatever crazy religion you've made up for that round over your headset. However, besides your office, the hellish crematorium next to your office, and the rarely used morgue, you have no access.

It is vital that you use the radio to call people to the Chapel, because otherwise, it is less frequented than the Library.

Bare minimum requirements: Hold a funeral if someone asks. Cooperate with security in the event of a cult. Follow your religion. 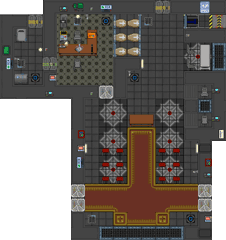 You have to set the name of your god and religion in the Character Setup window before the round starts, else you will be stuck with whatever the default is. The first time you interact with your book in a round, you can set its skin. The resulting Bible starts with a bottle of whiskey, and perhaps some other junk; you may want to store the holy water on your desk.

Hitting somebody in the head with your Bible has a 60% chance to heal them and a 40% chance to give them 10 brain damage unless the victim congregant is wearing robust headgear (helmets, certain hats, and any child of the helmet class.) You can even revive people who are in critical condition! But if you use the ability a lot, you will start to see diminishing returns, with a higher chance to cause brain damage, and a lower amount of damage healed.

- It should be noted that your book cannot be used by the non-believers, meaning: If someone steals your book and attempts to brain somebody over the head with it, the book will sizzle in that person's hands. However, others CAN access the content of the book itself.

This remote allows you to drop in a box with select chaplain-y clothes.

This is a black book that teaches one person the spell "Smoke". See: Magical Items

The obsidian rod will be your defense against the forces of evil. Having it in your possession will make you completely immune to the effects of cult-related magic. It will also destroy any runes/sigils and is an excellent weapon in general.

You can transform it into a holy weapon of choice by using it in hand! Options are:

You can only re-pick once.

Each chaplain is free to invent the details of their rituals.

The Mass Driver's primary purpose is for burials-at-space; wooden caskets are provided for this purpose. Caskets function likes lockers; place the body in the casket, give a eulogy (over the radio if no one is present), move the casket into the driver and fire it.

Note that some crew members may seek to use the Mass Driver as a way to exit the ship into space; for safety reasons, make sure they are adequately equipped before letting them through. This will send them towards the derelict station other side of the ship because our Z-levels loop.

The Crematorium is used to turn bodies into ash, including those of xenos. Remember to strip the body before cremating it.

The Pray command is like an adminhelp, but is IC, and should be worded deferentially (e.g., "Oh Great and Wise Pelor, please grant your humble servant...). It is advised that you only pray later in the round; the gods have a habit of ignoring early prayers. You can increase your divine favor by making a sacrifice to your god(s) of choice; you can do this any number of ways (it is wise to state what you have sacrificed in your prayer). Prayers are more likely to be answered if they are somehow thematically appropriate: wishing for an RCD for no apparent reason is unlikely to be fulfilled, but performing an elaborate ritual to your chosen god may be more favorable!

You have candles and crayons in your locker. Candles can be set anywhere and lit (they eventually burn down). Crayons can be used to draw runes (commonly placed in front of the podium), as well as graffiti (not really your style) and letters (allowing you to write out messages across the ground).

Do not expect any prayers to be answered. Gods are fickle beings. Nobody knows what they are going to do next in their great designs.

During a cult invasion, you will suddenly find yourself a vital part of the ship's security force, and also a target. You will want to ensure Security has a stock of holy water to deconvert cultists -- remember that your bible can bless any water it comes into contact with -- and Security may want your null rod as well. Your bible can be used to detect nearby hidden runes by hitting the floor with it. This can be invaluable in finding suspected cult bases. Finally, you are immune to cult magic, which will help you if you decide to go BATTLE PALADIN and valid save everyone. For more information, go here.

If your god hates you enough, you may also encounter a Revenant, an undead ghost creature that wants your souls. Again, your null rod is incredibly robust against these creatures.

As a traitor, your curse of being ignored by everyone becomes a valuable asset. The chapel is a relatively secluded part of the ship, and odds are the AI won't be keeping an eye on it. You have a null rod, WHICH IS ROBUST AS FUCK. Also don't forget that your bible is a useful storage compartment that won't attract suspicion, and if you hit someone in the head with a bible a few times they get brain damage and then it's a lot harder to yell for help. You can drag around bodies, as well as both space and cremate bodies without looking suspicious: it's your job, after all.

Also remember that the morgue tray in the crematorium can store bodies, items and even whole crates (such as the syndicate surplus crate). It's not a bad place to hide stuff (especially if the camera suffers from an "accident"), but keep in mind the light on the tray turns orange if anything other than a body is inside of it.

Another sneaky idea as a traitor is to host one of the chaplains universally renowned "Kool-Aid" parties. Make sure you purchased a toxins kit, then, go to the bar and ask for 10 glasses of grape or orange juice. Put all of the glasses on your table in the chapel then dump anything and everything from the toxins kit into each drink Jim Jones style, break into the captains office tell the captain to make an announcement saying that chaplain is hosting a party, and everyone on the ship is required to visit (someone might actually be stupid enough.) you may not get your target, but you might get everyone else.