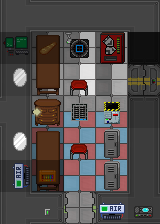 The Bar's Theatre is where you spawn along with the Mime.

You are... well... the funny person of the ship! Honk honk! This usually means you play harmless pranks on people to remind them that life on the ship is not to be taken too seriously. The Clown doesn't have to do anything must spread the word of the Honkmother through honks and elaborate pranks. Basically the clown's job is to goof off, much like an assistant, but clowns don't usually listen to anyone because they have places to be, and things to HONK!

Bare minimum requirements: Be funny to other crewmembers. This is harder than it sounds.

Nope, it is not a license to be a shit. Remember, you are still bound to rule one, as in don't be a dick.

When in doubt, ask yourself: "Are you irrevocably fucking with someone's round (killing, incapacitating, etc.)?"

If yes: don't do it. You'll probably get robusted and banned.

If no: you're probably fine.

This is where the bad clowns are separated from the real ones! Pranks can range from anything from harmless honks to the head to throwing random banana peels (usually people hate you for this most of all) all over the hallways, or even spamming prayers to the Honkmother for a H.O.N.K.-mech because those assholes don't have bananium so they could make you one.

If you are really out of ideas and on the verge of being so bored that you'll soon resort to just being a dick, here's a few things a good Clown can do to entertain the crew:

Both you and the Mime spawn in the Theatre and have access to all the costumes inside.

If the round goes on long enough, someone may be demented fun-loving enough to build to you a H.O.N.K.-mech. This mech even makes squeaky sounds when it moves instead of in addition to those awful clomping noises of other mechs. Make sure to attach the 'HoNkER BlAsT 5000' to it, for EXTREME HONKING! Honk!

Honking is how you get your work done. If you honk a honk honk then honk up the honk, well you'll have a doozy of a honk on your honk to wash off.

You get the clown suit with matching squeaky shoes (with built-in Waddle Dampeners[TM]), a bike horn, clown stamp (for approving monkey crates) clown mask (which works like a gas mask), a special infinite rainbow clown crayon so you can start writing naughty words all over the escape arm or eating it like a giant honking baby, a can of laughing juice, a megaphone to be extra obnoxious, a pie cannon, a banana, and your slippery PDA. Your PDA can infect people's PDAs with a virus that makes it randomly honk, and possibly do other things? Who knows, HONK!

Very little, but some people might want to kill you just for being the Clown. HONK!

Remember that time you were terrified by a clown when you were small? Well, this is the reason why. As a traitor, while you could possibly be just funny as hell and hope people won't kill you (like using the camo projector set to "banana"), you should learn how to robust or how to break and enter! Just have fun and relax, and honk while you betray people! If all else fails, get a Chainsaw and a Welding Helmet and kill people who slip on your banana peels (the scare factor is pretty high).