There are many diseases that can affect you in space! The following will come in handy for virologists, traitors, or any unfortunate soul who's come down with a case of brain rot. 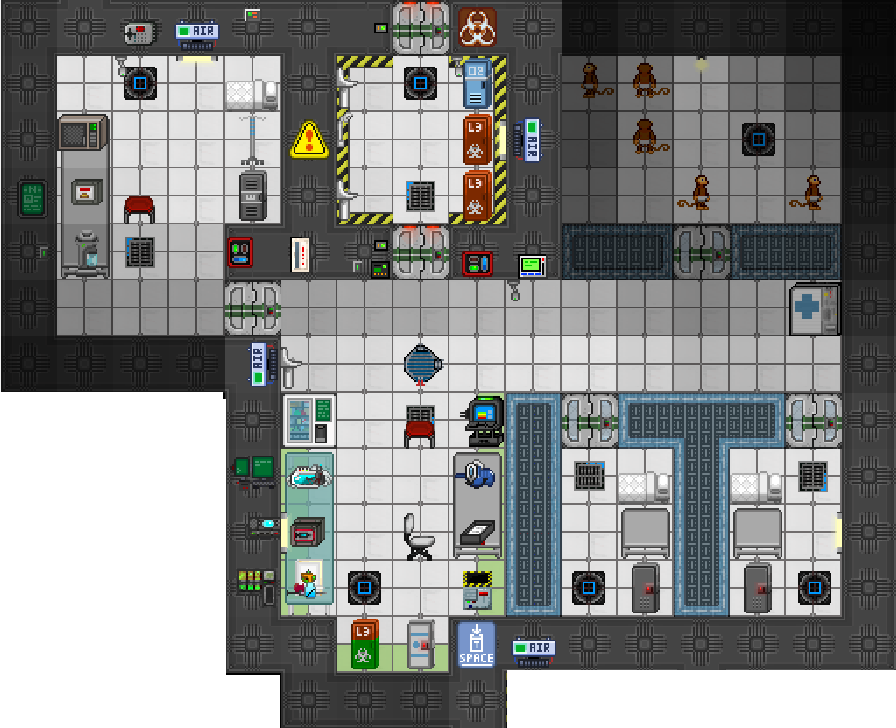 Virology is sealed from the rest of the station. You are not on the disposals network, nor do you share the same atmos system

The first, and most important way to prevent 99% of infections, is proper hazard wear, and knowing how to keep the infection from spreading.

The following will protect you, from the dangerous infections of space, each giving more and more (till total) protection against infection:

If you or another crew member is infected, do not spread the infection further. Seek the isolation bay of the medical wing, or head to a room no one will enter but yourself and other infected.

Cleaning blood spills from the ground will prevent contact contamination, make sure blood is cleaned from the floor at all time. Any blood splatter out there could hold a dreaded space infection. Contact a janitor if you see blood on the floor, do not interact with the blood if you suspect possible infection chance. Any object or floor that has infected blood on it can infect anyone who handles or touches it.

The following are the various ways a disease can spread, keep this in mind at all times:

Every infection is vulnerable to one substance (or combination of two). To find it, you can put an infected blood sample in the PanD.E.M.I.C 2200 machine or use a health analyzer on an infected patient. Administering the substance to the patient (may require multiple injections) should cure him. Alternatively, if you have produced a vaccine, a simple injection should cure the patient.

This machine creates vaccines from the blood of people who have been cured.

The viral extrapolator is a bulky, slow device, used to scan and extract diseases on the go. It has two modes, which can be toggled by using it in-hand

Scan 16px tells you what diseases are held within the target, if any, what symptoms they have, and what stage they are at.

By using a screwdriver on the extrapolator, you can remove its scanning module. Replacing it with a higher tier scanning module significantly lowers its cooldown and use times, as well as allowing isolation of higher level symptoms.

Symptom hunting: Some objects can contain trace samples of the disease that the extrapolator can make into a culture. Many of these start with random diseases at roundstart, and can be harvested. This is the primary source of level nine symptoms. These items are as follows:

Thankfully, humanity has managed to cure and eliminate almost all of the diseases that plagued its infancy. However, the vast reaches of space have been found to harbor new illnesses that can affect the unprepared staff on Nanotrasen research stations. The following diseases are Simple Diseases that cannot be affected by the PanD.E.M.I.C 2200 or a Viral Extrapolator, and have no stats or symptoms.

You are able to create your own advance disease with different symptoms, which will have buffs, debuffs and bonuses!

You will start out with two advance diseases, the cold and the flu. The cold will have the sneeze symptom and the flu will have the cough symptom. They have almost no effect if they infect people, but you need them to acquire more symptoms.

The Pandemic can create culture bottles (basically copies) of existing viruses, so you won't run out while experimenting.

A person has three slots for advanced diseases, with a fourth slot for sentient diseases. The slot a disease fits into is determined by Severity. If a disease tries to occupy an already occupied slot, and its transmission is higher than the resistance of the disease already in the slot, it will drive the disease out and take its place

To obtain a new symptom you need to mutate an existing virus. This involves adding a chemical to the virus, which will generate a new symptom. Rarer and harder to acquire chemicals will yield more potent symptoms. You will start with enough chemicals to create a powerful disease, as long as you use them carefully. You can also insert an isolated symptom into your main virus, by moving 1 unit of the isolated culture to the main mix with a dropper. It will not work every time and may need to be repeated a few times.

These are the basic chemicals for virus mutation. These can be added to a culture to gain a symptom from a large pool- but it's about half as efficient as mixing advanced chemicals.

Using these will allow you to both save time and resources when trying to acquire the symptoms you want.

These chemicals require large quantities of liquid uranium (obtained by grinding uranium bars). You'll require the help of mining to make these.

Spaceacillin will "Falter" a disease, making it unable to spread by any method but injection. Good for meme diseases, or if you wanna meet a transmission threshold without fucking everyone over

Cryostylane will Preserve a disease, making it unable to be mutated any further. If you finish a disease, you should Preserve it so it can't be edited, and so multiple diseases of different severity can be loaded into one bottle

Formaldehyde will neuter one random symptom when mixed with a virus. This disables its effects while keeping the attributes intact. This is useful for meeting threshold values without making the virus deadly. NEUTER YOUR STAT SYMPTOMS, ALWAYS. UNLESS IT'S SOMETHING WITH AN EFFECT YOU ACTIVELY USE, ALL AN UNNEUTERED STAT SYMPTOM WILL DO, EVEN IF THE DISEASE IS INTENTIONALLY DEADLY, IS MAKE THE DISEASE GET NOTICED FASTER, AND, SCARE PEOPLE IF YOUR DISEASE IS GOOD, PROBABLY GETTING YOU LYNCHED. NEUTER YOUR FUCKING SYMPTOMS. YES, FEVER AND ITCHING CAN DO SLIGHT DAMAGE. NEUTER THEM ANYWAYS, DAMMIT

Alright, since most people can't seem to grasp it: Virology is fucking SLOW! So this means you're gonna want to do a few things to make it faster!

1. Know what virus you want to make! I cannot fucking stress this enough. Random symptom isolation will never get you anywhere fast. Make a recipe for what you want, and then go aquire the symptoms

2. You'll need five beakers when you get started making your virus:

3. Lay out your Formaldehyde, Synaptazine, and Unstable Virus Food.

4. Finally, set an empty beaker out, and either Rhinovirus or the Cold. The Cold's symptom is Coughing, and Rhinovirus is Sneezing. I am a plasmaman, so all my diseases need high transmission- I prefer to set out rhinovirus.

5. Whichever symptom you choose to start with, drop a drop of formaldehyde in immediately! this neuters the symptom so your plague doesnt alert and scare people, which is bad regardless of your antag status. Remember to use your dropper, after setting it to one unit!

6. After you lay out your beakers on the table near the pandemic, situate yourself on a tile adjacent to the tables containing the reagents and your PANDEMIC machine. You will never have to move during this procedure- which saves valuable time.

7. With your recipe in mind, begin placing one unit of your starting symptom culture and one unit of the virus chem corresponding to your disease into the empty beaker. Do NOT place your virus chem into your culture, or your culture into your chem- it will set you back by an insane amount!. After you make ONE reaction, place the empty beaker in the pandemic-You never need to pick any beakers but this empty beaker up during the process- and check the symptoms. If you got what you wanted, create a culture, save your previous culture if it's the starter, you will need it later, or get rid of it if it's a random step in the process, and repeat with the chem for the next symptom, doing symptoms you will neuter first and neutering them as you get them. Repeat until you reach a total of four symptoms. To reiterate step five, ALWAYS use a one unit dropper! it makes you far more efficient with chem usage- if you use a dropper, your starting chems will usually last an entire round!

8. Upon reaching four symptoms, a virus has a chance to lose symptoms on gaining new ones. To avoid this, make a culture of your four symptoms, name it, and put it aside. Take your starter culture out, and begin the step 7 process. Once you get the fifth symptom, use the step seven process with synaptazine to remove the starter symptom, and finally repeat the step seven process one last time to get the last symptom. By now, you should have two cultures- one with four symptoms, and one with two (or one, five symptom diseases exist)

9. Finally, repeat the step seven process one more time, but using the two cultures, instead of a chem and a culture. There is no reaction sound for this mixing! Once you reach the desired number of symptoms (yes, adding symptoms via mixing can delete symptoms just like adding them via chems does), name the virus, and make a culture! you're done! yay! Consider Faltering your disease with Spaceacillin if you don't want it to spread, and/or Preserving it with Cryoxadone.

10. If you are feeling more confident, or want to get more powerful diseases, you can take out your Viral Extrapolator and head to maintenance to find diseases containing more advanced symptoms

After you're done mixing your disease, stats from the symptoms are added together to make disease stats. Viruses have a default of 0 in every stat.

Hover over the thresholds to see the effects of each.

Being a traitor virologist allows you to finally come out of your shell and release those negative recipes you've been aching to test, and put those level nine symptoms to the true test!