Do you long for new experiences? Are you comfortable working under pressure? Do you do well when working with explosives? Like making things go boom? If so, this is the guide for you! If you follow these simple instructions you will be prepared to load and maintain all of the weapons on your assigned vessel and qualified to call yourself a professional Munitions Technician. Be wary though, much like the goalie on a professional soccer team, you're the first one to blame if things go sour in combat, second only to the command staff, but if you can't handle the heat - stay out of the munitions bay.

As a Munitions Technician, munitions assigned squad member, or Master At Arms, your job is to supply and control the various weapons on the ship to make sure they continue firing. This includes 50 Cal. Cannons, Railguns, Artillery cannons, Torpedo tubes, Gauss turrets, and the Automated Missile System (AMS). The faster you can load and prepare these weapons, the faster they can open fire on enemy ships. Do note that not all of the weapons listed here may be on your assigned vessel, so be certain to take inventory at the beginning of a shift and prepare accordingly for each weapon's needs. 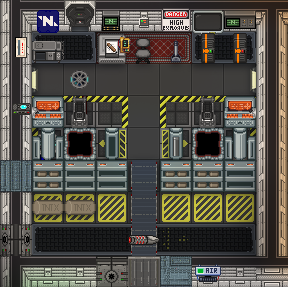 An example of an Artillery bay configuration.

50 Caliber cannons are the lifeblood of short ranged combat, serving as a rapid-fire weapon that is effective at taking down enemy fighters that other weapons may miss and destroying incoming missiles and torpedoes. The cannons are directly controlled by their designated consoles, and can hold 100 rounds of ammo. To control it, simply open the console and start shooting at things. Luckily for you, loading these cannons is as easy as firing them. Just go to the top deck and insert a new box of ammo into the gun turrets.

The Railgun is a heavy-duty cannon that fires powerful burst rounds. It is the only weapon controlled by the navigation console in the bridge and requires regular maintenance. These weapons have recently been removed from the standard ship loadout, though their use and construction is still permitted on Nanotrasen ships.

This is a great big thing that does great big damage. It uses Teflon-coated tungsten rounds, of which you can load up to four at once before the magazine is full. Once it's loaded, go to the console linked to the railgun, click "Load Tray", then "Chamber Tray Payload", and finally "Disengage safeties". Before reloading after a shot is fired you'll have to turn the safeties back on to avoid the gun breaking, becauset the safeties stop the gun from deteriorating.

The deck guns are massive cannons that, when operated correctly, can obliterate any enemy in an instant. They fire heavy projectiles which need to be primed before loading and are fueled with gunpowder which is used to propel the ammunition.
To load the Artillery cannon, simply take a cannon round and prime it with a multitool, then drag the round into the loading chamber and interact with the console to chamber the round. After that you're going to want to insert the gunpowder*. To do this you can just pick up a bag and insert it in the propellant racks, after putting it in you can add the gunpowder to the chamber by using the gun console.
It's important to note that there is no limit to how much gunpowder can be loaded at one time, meaning you can insert only 1 or even 20 bags of powder. Most of the time you'll want to put in a fair amount (about 5 bags or more) of powder as the cannon round travels very slowly without it.

Torpedo tubes, as the name suggests, fire high-velocity torpedoes which detonate immediately upon impact. Torpedo tubes are slow loading, require maintenance, but are capable of dealing incredible damage and can home in on the enemy ships, making shots almost always guaranteed to hit.

To load a torpedo tube, acquire a pre-made torpedo by dragging one onto a trolley (trolleys have a capacity of 5 torpedos) and bringing it over to the tube. Click on the trolley, click a torpedo to detach it, then drag and drop the torpedo into the tube to begin loading it. Afterward, use the adjacent console and press "Load tray", "Chamber Tray Payload", and finally "Disengage safeties" to finish loading the Torpedo tube. Remember to re-engage the Torpedo tube safeties whenever reloading to prevent damage.

The automated missile system is a series of missile tubes linked up to a central computer, this allows it to fire missiles automatically at targeted enemies. Loading the missiles is similar to torpedo tubes, requiring them to be assembled and then dragged in, chambered, and loaded. Operating the AMS is fairly simple, as you can do it with the press of a button. Simply walk over to the AMS control console and select one of two firing modes:

While using the anti-ship firing mode, the targeting system fires its missiles at enemy ships within its detection radius. It will also fire at enemy ships that have been targeted by fighters.

If you select the countermeasure firing mode, the system will prioritize targeting incoming gunfire to avoid the ship getting hit. It also fires at ships within the detection radius if there's no incoming projectiles.

Gauss guns can be found exclusively on multi-z maps, and fire 300mm Teflon coated tungsten rounds. Unlike other ship weaponry, these are not controlled by Bridge Staff using the tactical console and are typically manned by Munitions Technicians. Gauss guns require no maintenance.

To man gauss guns, buckle yourself into the gauss gunner chair and you'll rise into the cockpit above. To fire, click on the overmap to fire a powerful short-range burst. Gauss guns eat through ammo quickly, and you'll ideally want someone below deck keeping you loaded at all times. Loading tungsten rounds is as simple as placing them in a crate, click-dragging it to the loading rack, and sending it up for reloading. Additional slugs can be acquired from a nearby Gauss ammunition dispenser that can be upgraded by science to produce slugs at a faster rate.

These are the easiest ammunition types to acquire. All of these can be bought in crates through cargo for 2000 credits per crate with the exception of the 50 Cal. which can be bought for 1000. The gunpowder for the deck guns can also be aquired this way.
Deck guns do have one exception, if the research has been done it is possible to print new types of gunpowder and bullets using the cargolathe.

Torpedoes and missiles, unfortunately, cannot be ordered fully assembled and must be built by your own oil-covered hands. You need multiple things from cargo - components, casings, and warheads. Standard and armor piercing warheads can be ordered from cargo, but the other types must be researched by science before they can be made in the protolathe. Once you have all of these, turn on that conveyor belt and get this party started!

These are the steps you need to construct a missile or torpedo:

There are a total of six different types of torpedoes you can make. Each serves a different purpose.

Unfortunately it's only possible to construct two types of missile right now, but it's still important to know the difference. 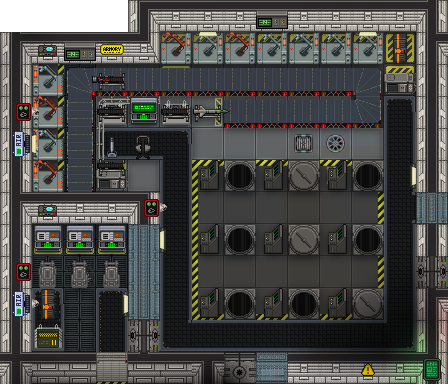 The missile factory on the Tycoon

So you thought you had to wrench, weld and wire each missile individually? Of course not! The future is now! There's a quick and easy way to mass-produce missiles available right in the middle of your munitions bay: The factory line.

The Missile factory consists of three key parts: the conveyor belts, which have usually been slowed down to accomodate for the working speed of the robots. Tool arms, which use specific tools on the casing and are colored grey, and red colored part arms that apply parts such as guidance computers to the missiles. The robot arms in the factory always apply their effect in the direction the red arrows on their frame are pointing, but can be loaded with parts from any direction. They also have no part holding limit, so you can fill them up with as many parts as you want.

You can even extend the factory! The parts required for making factory machines can all be printed in the cargolathe along with the conveyor belts after their research has been completed.

Most weapons require maintenance when they're used too much. You probably want to perform maintenance between each bout of combat.
Note: make sure there's nothing in the weapons and that the safeties are on, to prevent unnecessary explosions.

It may be difficult to swallow all of the information you've read, but don't worry! You'll very rarely be working with all of these weapons at once as you have fellow Munitions Technicians at your side to pick up your slack. Above all, remember to have fun. With a bottle of spray paint, you can do all manner of things - name your torpedo tubes, draw funny faces near the PDC racks, and draw the borderline between the rest of the ship and the newly independent Munitia.

Is the ships just floating around in friendly space? Are all the guns loaded and you have nothing better to do? Or are those glorified laser pointers simply not enough? Fear not, because now you can even BUILD more guns! From the smallest .50 cal to the largets Railgun, you can outfit your ship with all the firepower.

Disclamer: this is ADVANCED munitions knowledge, you don't need to know this to be a good Munitions Technician. If you know this, all the better for you, but first time MTs shouldn't read this, as the knowledge told up above is more than enough. Also, most ships come equiped with all the neccesary weapons to defend themselves, so building new ones should only be a side job.

With that out of the way, here are a few tips if you want to arm your ship:

Here is how you can construct ship weaponry:

As said before, this is advanced stuff, usually you don't need to build new guns, and it's one hell of a job to try and keep them all loaded. But it does take up the downtime that you otherwise would have spent in the bar, and some weird people might find it fun.

*Nanotrasen brand gunpowder is not suitable for use in hot or burning enviroments, keep away from children with lighters.